© 2003; 2014
Fellowship at Cross Creek
Life of Moses
Lesson 7: Overcoming the Excuses…
Ex 4:1-17
(1.12.03; 9.21.14)
Introduction…Over the years, I have come to the conclusion that perhaps one of the biggest obstacles to anyone’s Spiritual growth is the insecurity to risk the attempt or responsibility to lead others… be it one’s marriage, family, Sunday School class, Bible study or just about anything in life that involves others. I have seen it over and over again. Sheep without a shepherd. Great sheep. Talented sheep, and yet none of the sheep takes it upon themselves to risk shepherding or leading the other sheep in the very real need that needs to be met or the assignment that needs to be carried out. Someone take charge. Someone risk leadership, even imperfect leadership…even the complaints and grips of others. Seen a family or marriage without a leader? … Tragic. Seen a Bible study, small group or ministry project without a leader? … No direction.
Now you can’t be a jerk…I mean… all the time…and be a good leader as well. Sometimes the kids think mom or dad are jerks, we all understand this, but good leaders are teachable…trainable. They want to become better leaders, not so much for their own personal glory in leading, but to get the task done and done right, and this involves people…it involves a wise, expedient expenditure or allocation of time, manpower and resources.
What can I say? People need leadership. Not necessarily dictators, but definitely leadership…leadership and responsibility. Good leaders are willing to face their insecurities to become a better leader in order to meet the need or get the assigned task done.
And bottom line…no leadership risked, Spiritual growth and maturity, I promise you is arrested. NO WAY around it. Even servants must eventually risk leadership.

©iStockphoto.com/JLBarranco
So how does this relate to kids or students? I think a good teacher or leader seeks to identify, encourage and equip others, including students, to own the process of meeting the need or accomplishing the assigned task, as well as, constantly meeting the need or accomplishing the assigned task better. In other words, a leader seeks to build leaders. It is this easy? Heck, no. There are lots of pitfalls and nuances that must be navigated, but are we just teaching children for the sake of teaching or are we equipping students to think, lead and make difficult, complex and morally courageous decisions? What is our ultimate goal?
If I was exposing this study to children, I would probably attempt to get them to recognize a moment in time in which the kids interpreted a moment when a situation needed leadership and NO ONE stood up to the plate? Or perhaps, I would get them to talk about moments in which they felt someone was being too bossy and why? Now contrast that with a situation in which there was no direction? Where’s the balance? Why didn’t they step up to the plate? Why don’t most people? Just get them thinking about the concept of leadership and why many are fearful to risk its desperate plea.
Life of Moses’ General Introduction: You make a mistake; you think your life has changed forever; that there is no going back. In exile, you take your flock of sheep, which you have been pasturing for the past forty years, to an out-of-the-way desert valley that seems to symbolize your life. You see a fire in the distance that refuses to die. You decide to take a closer look. As you draw closer to the inextinguishable flame, suddenly your life does change forever…
The God of the universe has plucked YOU, out of all people, a wandering shepherd, to lead your entire nation, numbering well over two million people out of the country where they are currently enslaved, across a barren wasteland with little water or food resources, to a land which their forefathers had previously shepherded their flocks for a seemingly brief three hudred years, but has been now been abandoned for over four hundred years and is currently occupied by inhabitants who have no intention of giving that land back up to their forefathers’ descendents.
Impossible you say? Ridiculous? Sounds like it to me, unless the God of creation is the one doing the calling and doing the work. Do you have the guts to be obedient no matter what…no matter the price?
Pray
Read the Passage two or three times…
Ask questions…
Exod. 4:1   Moses answered,
“What if they do not believe me or listen to me and say, `The LORD did not appear to you’?”
Who is they? The elders of Israel? The Egyptians? Believe about what? That it was God or I AM or the LORD sending him to lead the children of Israel (or Jacob) out of Egypt and slavery? This is a great question. I would be asking it. Who would believe him?
2 Then the LORD said to him,
“What is that in your hand?”
“A staff,” he replied.
Why a staff? Was it because it was just convenient? Or was the particular tool of validation that God wanted to use? A staff to shepherd sheep. Fend off wild animals? Count sheep? Gently nudge or guide them? Lean on?
3 The LORD said, “Throw it on the ground.”
Moses threw it on the ground
and it became a snake,
and he ran from it.
How did God do this? How does God transform a wooden staff into a living snake? Was the snake hissing at him? Was it a dangerous snake? I still jump at snakes. This does come across as a bit humorous as Moses runs from his staff-transformed-into-a-snake. 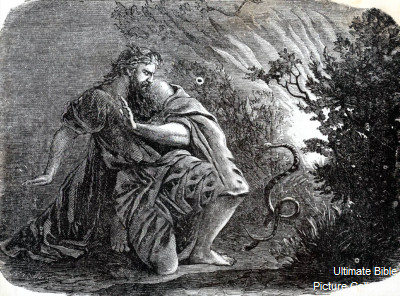