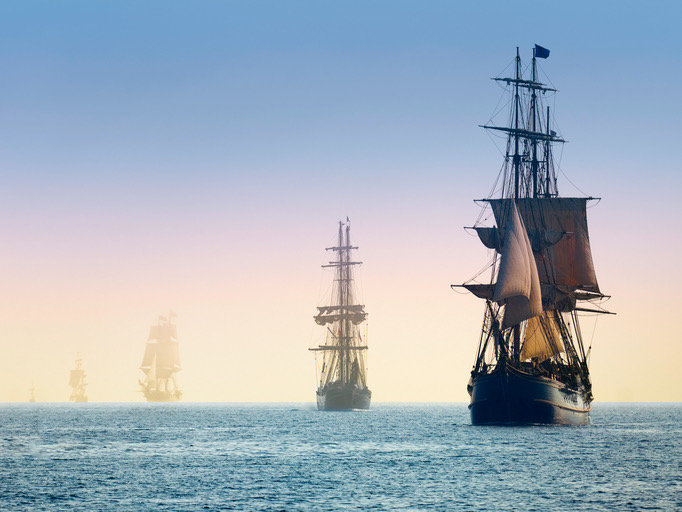 Tall Ships in the Mists of Morning Fog

So when we ask what is the proper biblical environment to produce spiritual growth, we are asking, “what are the biblical surroundings of the church?”  In other words, just as a garden requires the right environment–such as the right amount of sunlight for photosynthesis to occur, or the right amount of water to transplant minerals and nutrients, or its soiled tilled or cultivated for weeds, or natural fertilizers for growth or natural insecticides or fungicides to protect the plant from insects and disease–in order to produce a bountiful harvest, so what spiritual elements should every church contain, if it is to produce healthy spiritually growth among its members?

To answer that question, there are several passages which will enlighten us as to what these essential ingredients are.  The first passage is found in Acts 2:42-47.

Christ has already ascended to heaven. (Acts 1).  The Promised Spirit has poured himself out upon the apostles. In the languages of all the peoples present from all around the world for the Jewish Pentecost festival–which was held 50 days (thus the prefix pente or five) after the Jewish Passover, during which their Lord and God’s Son, Jesus, had suffered, died and been resurrected to atone for the sins of the world–they have miraculously shared their incredible story.  Peter, now full of the Spirit, has preached a powerful message explaining the miracle that had just taken place, namely, that the Apostles were not drunk because it was too early in the day for this.  Rather incredible ability to speak in other known languages was because they were filled with God’s Holy Spirit.

Peter then goes on to explain very articulately to the crowd how Jesus fulfilled the prophecies–that indeed he was the promised Son of David, or Israel’s promised savior, the Messiah or Anointed One.  Peter goes on to say that even his death, which you, Israel, had a role in, had been foretold.  In fact, you killed your King.  But it was a part of God’s plan in order to redeem or spiritually buy you back from the penalty and destructive power of your sin.  In other words, the Messiah had come to save the world spiritually first, before he returns to rescue it physically someday.”

In response to this the crowds asked, “What must we do to be saved?”

Peter responded, “Repent (or change the direction of your lives from faithlessness to faithfulness in Christ) and be baptized (or immersed as a public symbol, identifying yourself with Jesus Christ as your Lord and God, as well as, his death and resurrection) for the forgiveness of your sin.”

Miraculously, 3,000 did believe and repent that day.

•Look closely at the text. V. 42 list four things that they devoted themselves to.  Ask yourself do these seem to be the essential environmental elements of a church? Are they still important today?

Acts 2:42   They devoted themselves

to the apostles’ teaching and

to the breaking of bread and

43  Everyone was filled with awe,

and many wonders and miraculous signs were done by the apostles.

44  All the believers were together and

had everything in common.

45  Selling their possessions and goods,

they gave to anyone as he had need.

46  Every day they continued to meet together in the temple courts.

(What do the previous three verses seem to describe?)

They broke bread in their homes and

ate together with glad and sincere hearts,

enjoying the favor of all the people.

And the Lord added to their number daily those who were being saved.

Quite often miracles serve to validate the messenger or Apostle as being from God.  His message was therefore authentic and was to be listened to, trusted and obeyed.  Very minimally, miracles got the attention of the observers so that they listened to the messenger’s message.  Preaching about Christ, Peter had just said, “Men of Israel, listen to this: Jesus of Nazareth was a man accredited by God to you by miracles, wonders and signs, which God did among you through him, as you yourselves know.”  Acts 2:22.

•Also note the use of the definite article “the” before “fellowship.”  We often use “fellowship” in a general way, such as, “we had a nice time of fellowship.”  Seldom do we use phrase:  “the fellowship.”  It’s as if something specific is meant by this term, such as:  “a special relationship between fellow believers.”  And indeed there was!   See how strong the bond was in v. 44-45.  The biblical term “fellowship” is close to our idea of “family” or a “legal partnership.”  It is indeed, powerful–not anything like the church quite often uses the term today.

• Finally, does the phrase “breaking bread” refer to simply prayer before meals, when the bread was broken and distributed to each person at the table, or does it refer to the Lord’s Supper, specifically?  Some suggest that before every meal we are to be mindful of Christ’s sacrifice?  Also is this more of act or worship or fellowship? or both?  Why?  See 1 Cor. 10:14-22 and 11:17-34.

Another significant passage that sheds some light on the early church’s spiritual environment is Col. 1:9-14.  In this passage Paul tells the Colossian community of believers that he is praying that God will fill them with the knowledge of is will and that they may please God in every way.  He then goes on to list four “-ing” words or participles (words that are hybrids of both nouns [naming words] and verbs [doing words].  They both describe and do.).

since the day we heard about you,

we (Paul) have not stopped praying for you (Colossae) and

asking God to fill you with the knowledge of his will

through all spiritual wisdom and understanding.

and may please him in every way:

•bearing fruit in every good work,

•growing in the knowledge of God,

• 11 being strengthened with all power

so that you may have great endurance and patience,

•and joyfully  12 giving thanks to the Father,

who has qualified you

in the kingdom of light.

13  For he has rescued us from the dominion of darkness

and brought us into the kingdom of the Son he loves,

14  in whom we have redemption,

the forgiveness of sins.

the fellowship growing in the knowledge of God

the breaking of bread being strengthened with all power to endure

prayer giving thanks to the Father

•Notice how three elements from each list seem to match up.  While these may not be direct correlations, a pattern does seem to emerge.  1)  Worship: including prayer, praise, and thanksgiving;  2) Discipleship:  to cause someone to learn or teach someone about God and his truth;  3)  Fellowship and Stewardship:  using my God-given gifts, resources and abilities to build up or care for my spiritual family or others that God might lead me to minister or serve.

•The two that are left over from each list are:  “the breaking of bread” and “being strengthened with all power to patiently endure.”  With respect to “the breaking of bread,” again this seems to be both an act of worship and fellowship or “communion.”  And as far as “as being strengthened to patiently endure,” we can not over emphasize its importance enough, especially in a day when all to often many seem easily discouraged and fall away from their commitments, be it: marriage and family, friendship, country, community, work, or the body of Christ.  Without commitment, there is no endurance, no success and no reward.

•Fellowship Bible has established several essential elements of a healthy growing church or individual member.  This by no mean implies there are not more crucial elements that go into making a healthy thriving environment for a church body.  These four along with “patient endurance” just serve as the essential starting foundation.  They are:  Worship, Discipleship, Fellowship and Stewardship.  Together they make up the Four Ships of Fellowship.  As Columbus’ three ships safely carried him through rough ocean waters to a new world, we believe these four ships will carry, not only our Body to his New World, but each individual passenger on those ships as well.  At least those who decide not to jump ship!  Patient endurance!

•Following is a more detailed breakdown of what is included within each of these categories.  Notice when one considers all the various facets of each essential, there is plenty of room for growth and maturity.  On the other hand, please don’t miss the simplicity of each essential either.  Anyone can start wherever they are and grow.  The key is not to ignore any one category.  Growth is a long-term project or process.  One cannot entirely focus on Worship to the neglect of Discipleship, Fellowship or Stewardship.  By the same token one cannot focus entirely on Discipleship without being sensitive to Worship or Fellowship.  All are needed for balanced, healthy Christ-like growth.